Home » How many FPS crossbows to kill a deer? You won’t need too much speed to take down a deer with a crossbow compared to hunting big game animals. A crossbow with 250 fps and above can be enough to kill a deer.

Since not all crossbows are for hunting, you must carefully choose what crossbow to purchase that can ethically kill the animal you plan to hunt.

For instance, joining the big game hunting requires higher draw weight and speed to take down an elk or moose. On the other hand, you will likely need lower fps and poundage to take down a whitetail deer.

That’s why it is crucial to identify first what hunting game you want to join before purchasing a crossbow or whether you plan only to use it for target practice. Whatever plan you have, you must also ensure you abide by your state’s crossbow regulation to avoid legal troubles.

You may wonder how many fps your crossbow needs to kill a deer. For deer hunting, you only need a crossbow with at least 250 fps and above to take down a deer.

Compared to hunting elks, it is ideal to use a crossbow that shoots at 300 fps and up to kill them with a minimum recommended draw weight of 65 lbs, but it strictly depends on the state crossbow regulations.

Here is the list of crossbows with 250 fps and up suitable for deer hunting:

You may consider making your crossbow shoot faster by using lighter arrows. Although shooting arrows with weights below the recommended can increase your crossbow’s fps, it has consequences that are not worth sacrificing.

Some crossbow hunters argue that speed is not the most significant factor in hunting, while some disagree and think otherwise.

Speed is good; however, focusing on speed alone won’t ensure 100% success. It can be an excellent important factor in target practice but not for hunting.

Shooting faster with lighter arrows is not entirely necessary and better. It will be much noisier to shoot and noticeable, especially for animals with a keen sense of hearing, like deer.

Please note that noise travels faster than arrows, so deers have more time to react before the bolt hits them. As a result, you’ll completely miss hitting the deer, or worse, you’ll give it an unethical shot.

That’s why you must remember that speed alone doesn’t kill the target, and it is always better to stick to the recommended arrow weight by the manufacturer.

Luckily, manufacturers make it relatively easy for hunters and target archers to select the correct arrows for their crossbows. Most manufacturers nowadays provide a complete package with bolts based on the weapon’s power stroke and draw weight.

Hence, instead of relying on speed alone, it would be best to consider other factors relevant to your success so you can kill the deer ethically with your crossbow.

Can you kill a deer at 100 yards with a crossbow?

You can kill a deer at 100 yards with a crossbow, but the chances of ethically killing it decrease significantly. Therefore, it would be best to shoot a deer at a maximum of 40 yards for a higher chance of an ethical kill.

Crossbows can undeniably take down wild animals ranging from whitetail deer to bears, moose, and elk. Nonetheless, bow hunters must abide by always going for an ethical kill no matter what animal they choose to hunt.

A crossbow hunter must know the ideal range he has to take to avoid any misses and minimal wounds that can lead to more suffering for the animal.

You may be thinking of shooting a deer with your crossbow at a distance of 100 yards for various reasons, including personal preferences.

However, doing so won’t be an easy feat because the penetration power of the arrow decreases as the distance increases.

For instance, please refer to the following example below:

Supposed you fired a 400-grain bolt from a crossbow with 350 fps, you will notice a significant drop in the arrow’s trajectory depending on the distance as follows:

Imagine if you shoot at 100 yards, you’ll likely lose about twice than when you shoot at 50 yards. No matter how powerful and advanced your crossbow is, the arrow’s trajectory will still drop the farther distance significantly based on the physics law.

Therefore, even though shooting at such a distance is possible, it won’t be entirely practical and adequate.

Nonetheless, if you plan on shooting at over 40 yards, you’ll need consistent practice, perfect precision, and correct shot placement. Most crossbow hunters can’t do so with consistency because they are uncertain if the arrow will land where it should.

You can always practice with the same gear as you try to extend your standard range limit, and possibly you can shoot a deer at 100 yards successfully and accurately.

Remember that it would require an incredibly skilled shooter to hunt a deer at over 80 yards. However, if you lack the care to hit a deer ethically, you can shoot as far as 500 yards, but that won’t be good practice as a crossbow hunter.

How far do deer run after being shot with a crossbow?

How far a deer run after being shot with a crossbow depends on where it got hit. Nonetheless, if you successfully shoot both of its lungs, it will run at a short distance of approximately 100 to 150 yards.

A deer’s reaction to getting shot with an arrow depends on which part of its body gets hit. Moreover, you can always expect some deers to react differently than others.

Nonetheless, there are pretty undeniable common similarities in how far a deer usually runs when hit in the following areas mentioned below, which can be your guide to know what is the next best step:

The boiler room refers to the shot in which the crossbow hunter hits the deer’s vital areas: heart and lungs—shooting the deer at its critical spots results in a quick, humane kill.

All hunters know that shooting the animal at its heart and lungs is the desirable shot they can give to the deer to shorten its suffering. Remember that the deer’s lungs are its largest organ, roughly nine inches in diameter.

An obvious sign that deer get hit in both lungs is that it usually runs hard and fast. You’ll see it running in long strides and its belly low to the ground.

Most deers also flee the area with their tail down, typically running at only 100 to 150 yards.

It is not entirely the same as a deer shot at only one of its lungs. Some will run hard at first but slowly walks after a short distance. You will need extreme patience when tracking, which is often challenging to recover.

If you shot a deer only at its heart, find signs that it kicks out its back legs as it promptly leaves the scene as if it got an electrical shock.

Additionally, it runs erratically for a brief distance and will likely change directions repeatedly, then slows down before it drops to the ground.

On the other hand, a deer that got its heart only sliced will usually travel up to 200 yards.

It is not always that crossbow hunters can accomplish the perfect ethical shot. Sometimes, they inflict a back shot on the deer, leading to difficult recovery.

Although a hit in the animal’s spine can take it down immediately, shooting at this body is not ideal. It usually happens when a hunter misjudges the distance or does not directly get down on his target.

If you shot a deer at its back, you should look for the following signs:

On the contrary, if you end up inflicting muscular and skeletal wounds on its back, it will likely react similarly to the one above, except for a hip shot.

With a hip shot, the arrow will inflict significant damage on the deer’s arm muscle. You’ll notice that the deer could favor one leg as it escapes from the scene with its blood running down the wounded leg.

An inflicted abdominal wound on a deer gives off a different reaction from a deer shot in its vital organs. It will also require a different approach to tracking it down.

The abdominal wound refers to the deer getting hit at any of the following parts: the intestines, liver, and stomach.

The deer will typically run at a short distance before halting, and there are instances that it will flinch or jump before escaping. You can expect it to travel for only a short span of a few yards to 100 yards.

Most deers with an abdominal wound stop within 50 yards and then stands in place for a few minutes. You’ll see its head down if it starts sauntering instead of running.

Aside from the signs mentioned above, see if it has a hunched-over appearance with its back end raised and legs in a wide stance.

It would be best to wait several hours before you begin tracking it.

Nonetheless, determining whether you had a hit-or-miss shot is not always easy. Therefore, it can be challenging to determine whether a deer’s reaction means an ethical kill or a complete miss.

Remember that it is common for deers to run even when a miss occurs. Nevertheless, there are telltale signs that can help you pinpoint whether you have a probable miss.

First, you must keep in mind the deer’s alertness. You can tell that you had a clean miss if the deer runs and stops, then look back in your direction with its head held high.

A deer that got wounded won’t want to stick around and wonder where the some came from, which can be noticeable if you see it look around the area. Moreover, it won’t stop to look back as it starts to run.

Another sign is that a deer drops its tail when shot. Its tail flags halfway in the first few yards, then wholly drop as it runs further.

It would help if you also listen to the sound intently since a loud crack can mean hitting its bone cavity or your arrow hitting a hard surface like a tree or rock.

Knowing the following common deer reactions will help you determine what appropriate actions to take as you try to retrieve the deer.

Deer hunting with a crossbow can be exciting because the weapon promises a high penetration power and speed. Despite this, always remember that speed isn’t always the answer to everything regarding hunting.

Knowing how far you must shoot a deer and how far it runs can also help you make a humane kill and decide on follow-up action.

Related posts:
Are expensive arrows worth it?
How wide is a crossbow?
Can You Hunt Rabbits With A Crossbow?
Do You Wax Recurve Bow Strings?
Previous Post: « Can you use a D-loop on a recurve bow?
Next Post: How much does a Horton Supermag crossbow cost? » 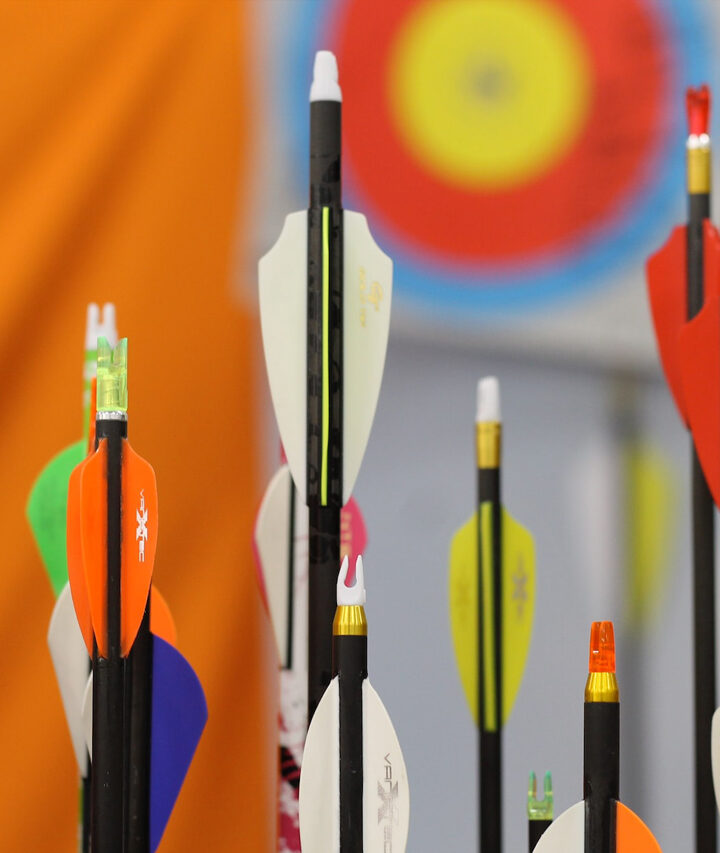