Home » Why are archery releases so expensive? Archery releases are expensive for the reason that it helps archers shoot better. Once the archer applies the right amount of pressure on the trigger, the release aid lets go of the string resulting in the arrow flying to the target with astonishing accuracy.

Traditionally, most archers would settle with the use of nothing but their fingers to pull back and release the string on a bow.

Most archers still do this. However, modern times have seen many developments in this area. One of these developments is the creation of archery releases, the purpose of which is to make things easier for the archer. It is also more energy-efficient.

An archery release is something you attach to the bow’s string. It helps you, the archer, pull back and release the string.

There are many forms of archery releases. The forms can vary from simple glove-like ones that cover the archer’s fingers to complicated ones that remind you of a trigger on a firearm.

Besides, most modern compound bows were already designed with archery releases in mind. There might be a few compound bows the archer can use without release aids. However, the chances would be rare to none.

Why should I use an archery release?

Aside from the traditional hardcore archers, most agree that archery aids have more advantages than disadvantages.

For starters, archery aids positively affect an archer’s accuracy. Accuracy aside, there is also the decreased potential of finger fatigue and accidental dry firing.

Let us start with accuracy.

Before firearms became popular, nobody thought about bare fingers and their accuracy as release methods for archers.

And as you already know, bare fingers are not an accurate release method. Fingers are cylindrical, bumpy, and have fluctuating surfaces.

These characteristics make fingers not conducive options, especially when we talk of the quick travel of a string.

Also, some inconsistencies happen every time these fingers release the string.

An inexperienced archer may feel like they are doing the same thing every time they release the string. However, on a microscopic level, it is far from the same. The times and the speeds would have slight differences.

These differences affect the flight path of the arrow.

For the arrow to make it from one point to another, it must rely on kinetic energy.

And so, the more energy it spends to correct its path, the fewer it has left to make it to the target. This reason alone affects the accuracy and power of the archer’s performance.

An experienced archer would have pulled a string a thousand times in his lifetime. It should be true if the bow comes with high draw weight. Such would exhaust the fingers.

Aside from this, there is also the tension to think about. There is tension when keeping the fingers hooked and still in the starting position.

Dry firing is when an archer releases a bowstring without an arrow attached.

For somebody who is not familiar with archery, there might be no harm here. For starters, there is no projectile fired.

However, can you remember the kinetic energy we discussed?

The energy is the main reason an arrow flies from your bow to its target. And so, without the arrow, the energy does not have anywhere else to go but the bow.

Such an incident can result in a lot of damage.

The bow’s limbs are usually the first casualties of dry firing. At times, the riser and other parts can also explode and cause damage and harm to the bow and potentially the archer.

The device clamps itself into the string, thereby minimizing the odds of dry firing accidents from happening.

What is the difference between a cheap and expensive release?

In general, archery releases are expensive.

However, the prices of archery releases also vary. Some can be more expensive than others.

The differences can vary depending on manufacturing tolerances, brand, and the adjustability of each release.

When it comes to archery releases, it always helps to go with a great-quality release. And those that come in good quality also come with a hefty price.

As expected, a cheaper archery release may not be as good to use as an expensive one. Its mechanisms may not be as smooth. You will also not have the same level of adjustment that you get out of a higher-priced release.

With cheaper archery releases, you also run the risk of the release failing. The design may not be as good. The materials may also not be as extraordinary compared to the expensive ones.

Finally, with regular use, the cheaper archery releases may break.

And as earlier discussed, this can hurt you and your bow in the process.

A more expensive release can last for many years. It works smoothly with the archer and comes with durable materials.

Some expensive releases can last for more than a decade.

What are the types of archery releases?

There are many types of archery releases, with the most popular being the index finger releases. Another common release is the handheld thumb or button release aids. Finally, we also have the hinge release aids.

Archery releases come in many types.

Out of the many archery releases in the market, choosing one can be confusing and complicated.

However, you should take note that out of the many, only three are commonly used by archers who shoot compound bows.

Despite the variations, these three always stand out.

The index finger release aid is the most popular type of all the release aids on the market. And these types of release aids are popular for a good reason.

Most index finger release aids come with thick and comfortable wrist straps. These types of releases completely free the fingers of the archer from doing anything until the time comes to pull the trigger.

Pulling the trigger requires the use of an index finger. Because of this, this is also the type of release most would use on firearms. And this is another reason why this type of release aid is popular in the market.

We are all aware of how simple it is to pull a metal trigger.

Our familiarity with pulling a metal trigger is a confidence booster for archers who use this release aid. There is no need to learn how to use this type.

Other release aids need some getting used to.

Another advantage of index finger release aids is the level of control it gives the archers.

Index finger release aids provide the archer with complete control when it comes to the moment when the arrow separates from the string.

Archers even coined a term for such complete control. In the world of archery, they call this command shooting.

As always, there will also be a disadvantage to using index finger release aids.

A common disadvantage is “trigger panic.” It is a behavior that comes with using index finger release aids.

Such behavior resulted in the archer firing even when they did not mean to do it yet. Archers who use this type of release aid get used to pulling the trigger upon seeing the pin in the bow sight.

Trigger panic is brought about by instinct with continued use of the index finger release aid. However, an archer can avoid such a problem with the presence of mind and focus.

If you are wondering which brand to buy, Scott Archery Shark II is the best in the market. The release aid manufactured by Tru-Fire is also a decent choice.

While in the market, you may also encounter users referring to these aids as thumb releases, button releases, or thumb buttons. However, you need not fret. All these are the same.

The most notable distinction is the absence of a comfortable wrist strap.

Now, what does this mean for you?

What this means is that there is complete involvement of your fingers and hand in the pulling-back process.

However, the release aid is also popular among archers for a significant advantage you do not find anywhere else.

This advantage is in the release aid’s preservation of anchor points.

Anchor points refer to the points of contact where the cheek or mouth meets the release hand. This point is only when the archer is at full draw.

An archer has to keep these points of contact consistent. Keeping it consistent results in being able to shoot tight groups of arrows.

Keeping these points consistent will also allow the archer to adjust the aim accurately. It should be helpful if an archer’s shots are not landing where the archer wants them to.

Aside from this significant advantage, there is no major difference between a thumb button release aid and an index finger release aid.

Release aids by Carter Enterprises are the best there is around.

And finally, we have the hinge release aids.

First, let me remind you that this release aid is not for beginners. If you are starting archery, this type may not be for you.

Similar to the thumb button release aid, the hinge release aid does not come with a wrist strap. In short, this is a handheld release aid.

However, it would be best if you remembered that the function of the hinge release aid is somewhat different.

For this reason, those who may be new to archery would find the release aid uncomfortable to use.

This type of release aid may not work well with archers unfamiliar with the release process. If you are going to use this, you must also familiarize yourself with the build-up of tension.

Even the most experienced bowhunters and target shooters can find a little discomfort using this release aid. That should especially be true when they pull back too quickly.

It can also take you by surprise if you rotate your hand slightly, even without meaning.

However, are there advantages to using the hinge release aid?

One of the significant benefits of the hinge release aid is the preparation. With this type of release aid, there is no need for further subconscious preparation.

You may not notice it much. But just before you release the string, you always give a slight jump. Other bowhunters tense up before the release of the string.

When you do this, your body prepares for everything that happens when firing an arrow. It prepares the body for the noise and the shock to your hands. It even trains your subconscious to the possibility of your arm getting hit by the string.

While these are all in the subconscious, these can affect the flight path of your arrow.

Additionally, you have one less worry when you lose control of the release. It should free you from worry and allows you to concentrate on the target.

If you are into this type of release, try Scott Archery Store’s Longhorn Hex Release. It is your best bet.

There are many different kinds of release aids in the market.

Release aids come in many forms. However, these three are great introductions to the development that helped bowhunters and target shooters focus and increase accuracy for many years.

If you are going to get one, test them yourself. See how comfortable you are in using them.

And the next thing you ask why archery releases are expensive, think about the benefits.

Doing so would let you understand why.

Related posts:
Why do arrows fishtail?
Why do archers wear shoulder pads?
Can you shoot vanes with a recurve?
Does Cold Weather Affect Arrow Flight?
Previous Post: « Can I take a compound bow to Mexico?
Next Post: Can you overdraw a recurve bow? » 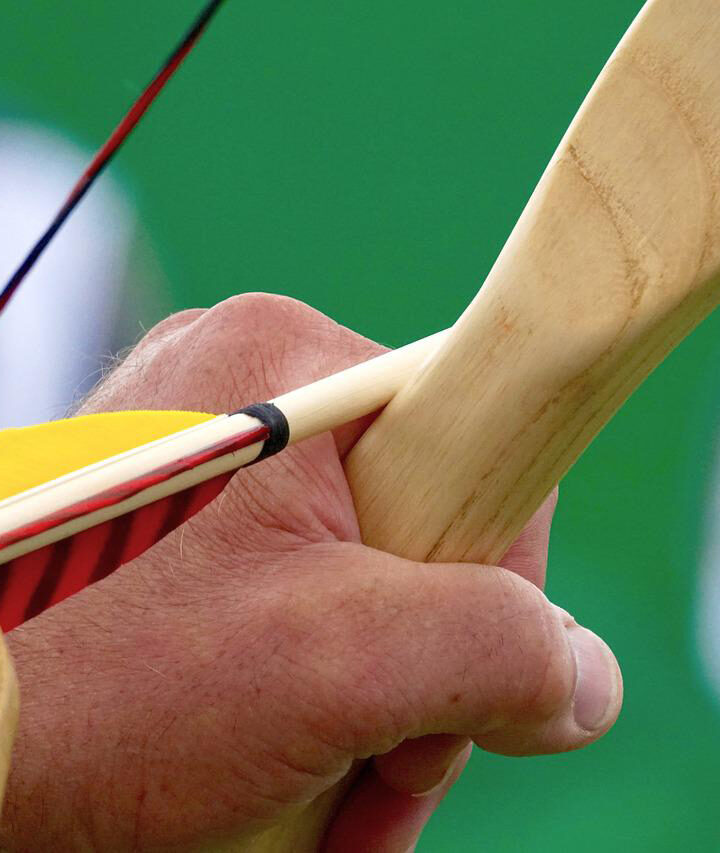