Home » How old is my Bear recurve bow? Finding out your Bear recurve bow’s age can be pretty complex. However, you can determine how old it is by looking at its bow material, coin medallion, leather grip, serial number, patent mark, bow model, decal & silk screening, and manufacturer location.

Every manufacturer has its unique way of identifying the age of their bows. Some have used serial numbers since their first production. Meanwhile, some are difficult to guess because of the rapid marking changes over the years. Unfortunately, Bear Archery is one of them.

Unlike other bow manufacturers, Bear Archery has applied more than five changes to its bow markings, making them challenging. Moreover, identifying the age of a vintage Bear Archery recurve bow can be more troublesome than the one recently produced and released in the market.

Luckily, it can get easy by looking at the following several features and changes made to the Bear bows over the decades, as enumerated below:

As we all know, wood is the primary and the first material used to make a bow. As more time passes, manufacturers shift to more durable synthetic materials since they are more durable and can last longer than wood.

That’s why it is no wonder that Bear Archery, which has been in the field for nine decades, has produced bows made of all wood in the past and then shifted to those with laminations. As a result, the bow material can be an excellent reference to help you know your bow’s age.

For instance, look at your recurve bow and see if it is all wood or has any laminations. Assuming it is the former, it probably dates from before 1949, when Bear Archery began mass production. To help you determine it better in a precise manner, please refer to the following information below:

On the other hand, if your bow has any laminations, it would likely be among those mass-produced in 1949.

Aside from identifying the bow material, another excellent way to date your Bear Archery bow is to know its type of Coin Medallion. However, please note that the Coin Medallion dating method began in 1959 and is thus not applicable to those Bear Archery wooden bows.

If you notice your bow has a Coin Medallion attached to it of one type of metal or another, you can have this list as your reference to date your Bear Archery recurve bow:

Bear Archery halted the Coin Medallion features on their bows after 1972. Hence, it can be pretty vague to identify the bow’s exact date of manufacture for those with Gold and Chromes Medallion.

Another feature to look for in your Bear recurve bow is whether it has a leather grip on it or not. The company attached leather grips on their bows until 1959. If your Bear bow doesn’t have a leather grip, its manufacture date is after the mentioned year.

Bear Archery has been putting serial numbers on their bows before 1965. However, dating Bear bows made before 1965 is more complex than those made between 1965 to 1969.

The serial number on these years appears to be a hand inscription on the Bear bows’ limbs, together with each bow’s corresponding weight and length.

For instance, your Bear recurve bow has a serial number of 6H313. As you can see, its first digit is “6,” then your bow’s year of manufacture is 1966.

Because Bear Archery started over every month, serial numbers on bows made before 1965 are pretty tricky to date. For instance, a bow with the first digit “K” on its serial number, like KZ9874, was in 1970.

There are also some Bear Archery bows with a patent mark on them. For example, those Bear bows made between 1953 and 1972 have logos and US patent marks like CANADA 1953.

However, it only refers to the patent date of working recurve bow limbs and has nothing to do with the bow’s model year.

Identifying your Bear recurve bow’s model is another more straightforward method to help you know its age. For the production chart of every famous Bear Archery Bow, please refer to the table below:

Thus, you will be able to determine your Bear bow’s age better if you know its model.

Besides the previous ones mentioned above, you can also know a Bear recurve bow’s age by looking for any decal. There are two decals that Bear Archery attached on its bows: The small Running Bear decal and the large Standing Bear decal.

However, it didn’t last long, and Bear Archery ended its usage in 1955. By 1956, silk screening started appearing on all Bear Archery bows.

Lastly, you can determine your Bear recurve bow’s age by identifying the manufacturer’s location. For example, in 1978, Bear Archery relocated its manufacturing operations and office to Gainsville, Florida.

Therefore, if your Bear recurve bow shows “Gainsville, Florida” on it, its production year is after 1978.

Understandably, it may take time to determine the exact age of your Bear recurve bow, considering that the company made many changes to its markings over the years.

Nevertheless, various ways or methods can certainly help you by looking at the characteristics and features enumerated above. The newer Bear Archery recurve bows have the model name, and you can search it on the company website to know what year it launched.

Bear Archery still makes recurve bows and has been in the bow manufacturing field for over nine decades. They release a new lineup of traditional bows each year on their website.

Founded by Fred Bear in 1933, Bear Archery has been producing industry-leading bows for over 90 years and will probably continue for other decades. The bow manufacturing company has defined itself as the industry standard for longbows, and traditional recurve bows.

In terms of the company’s history, Fred Bear sold the company to Victor Comptometer in 1968, and since then has been sold to other companies.

Escalade, Incorporated owns Bear Archery and continues to make the company’s legacy stand firm by striving to create bow equipment that will give its customers the best experience.

Although some things have changed since Fred Bear sold Bear Archery, the succeeding new owners of the company aim to follow what Fred Bear started, which is to continually incorporate his vision, spirit, and craftsmanship into every bow produced.

Here is the list of the new recurve bows produced by Bear Archery that you may want to check out exclusively on their website:

Besides recurve bows, you can also find new models of compound bows, longbows, and crossbows that the company will release next year.

What is the most popular Bear recurve bow?

Bear Archery Grizzly Recurve Bow is Bear Archery’s most popular recurve bow. If you look at their website, it is the company’s best-selling recurve bow with a 4.8-star rating.

Bear Archery has released countless traditional bow models since its establishment. Because of their bows’ outstanding quality, premium design, and durable material, they are perfect for long-lasting use.

It only makes sense that the company never left the archery scene because it has loyal patrons that always look forward to its more improved bows and new releases.

Along with its number of popular recurve bow models, the Kodiak, Montana, Supermag, etc., there seems to be one recurve bow that is the most popular: the Bear Archery Grizzly Recurve Bow.

You may be curious about what makes it earn a 4.8-star rating on Bear Archery’s official website and a 4.7-star rating on Amazon. Enumerated below are the specifications and features that make Bear Archery Grizzly Recurve Bow the most popular and certainly a fan favorite:

It is the perfect choice if you want a recurve bow with high quality coming from a prominent manufacturer. In addition, it is also ideal for both skilled and beginner archers and hunters because it can accommodate any skill level due to its design.

Bear Archery Grizzly Recurve Bow is a traditional takedown bow in multiple sizes and lengths. It also has that classic look with a crowned, cut-on center. Another great thing about this model is that it is accurate, durable, strong, and lightweight.

You won’t have any issue shooting it because it is easy to hold and maneuver for those who are not as strong as others. Moreover, it is the legendary bow model that Fred Bear made in 1950 and came up with final changes in 1964.

As a result, buying the Bear Archery Grizzly Recurve Bow feels like you have one of the precious items that the iconic Fred Bear created before he finally rested in 1988.

Bear Archery has proven time and time again that the legacy Fred Bear built will continue to live on through selling high-performing and top-tier bows. Knowing how old they are can be time-consuming and confusing if you are into vintage Bear Archery recurve bows.

Nevertheless, you can rest assured that your shooting will be worthwhile no matter how old the Bear recurve bow is.

Related posts:
How fast does a 50 lb recurve bow shoot?
Can I leave the string on my recurve bow?
Are expensive arrows worth it?
10 Ways Archery Counts As Exercise
Previous Post: « How much does it cost to restring a compound bow at bass pro?
Next Post: What is a reflex deflex longbow? » 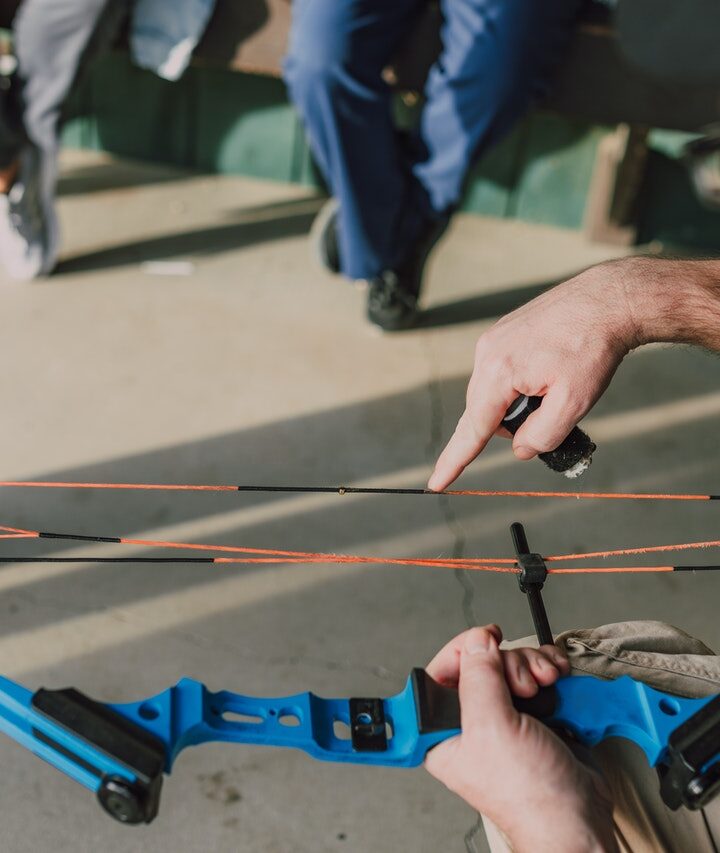