Home » How Fast Do Longbows Shoot? We Have The Numbers! Longbows are tall bows known for their relatively narrow limbs and D-shaped cross-section, measuring four to six feet. The bow is as tall or taller than the archer, and its length allows them to use a longer draw.

Hunting was the primary use for it as recorded by the Welsh around 600 AD. But, today, archers commonly use it in target shooting, and others ask how fast they can shoot.

Although longbows are slower than recurve or crossbows, they can still create speeds of 130-180 feet per second (fps) with 25-70 pound draw weights.

The speed of the longbow depends on the draw weight, length, materials, and arrows used. Experts test longbows on how fast they shoot arrows through the readings of the shooting chronograph.

But if you do not have a chronograph, you can use this method to estimate the speed:

If you need more arrows, take a look at these products on Amazon.

Getting the speed is essential in creating a comparison on different bows. A positive result means they are well constructed and designed. A negative answer can mean poor construction and design. But it does not mean it is a defective bow.

An aggressive longbow can shoot 180 fps while slower bows go over 140 fps. For hunting, archers are happy to have a longbow speed of 150 fps per second (for self bows) and 165-180 fps (for fiberglass or advanced materials).

Choosing a bow isn’t all about speed

Although speed can mean a quality bow, you have to factor in balance and stability. Remember that speed doesn’t matter if you are unable to have a proper stance. Even Olympic archers have lower draw weights because they know they can control their draw weight.

Experienced longbow archers say that speed isn’t an issue (unless the bow shoots below 140 lbs) as they prefer a longbow with a shorter riser (15-20 inches) and longer limbs due to a smoother release.

A sweeter release is more enjoyable than a bow having loud vibrations. Also, archers are more personal when choosing the material as they look for good custom wood options.

Looking for a longbow? Check for some modern longbows here.

You can craft a longbow from a single piece of wood. Bow makers, also known as bowyers, can make a bow within a few (for experts) to a couple of hours (for amateurs). A longbow made of a single piece is also called a self bow.

Bowyers make longbows out of yew, sapwood, oak, and elm. Yew is the most common European timber for self bows. However, you can use cheaper but hardwoods, like maple and ash too.

Yew is best for longbows

You can have your preferences in choosing bow material, but yew has been present as the top-tier wood for longbows since the 1600s.

Yew is a suitable wood for both the belly and back of the longbow as its sapwood, which is light-colored, provides tensile strength while its heartwood has high compressive strength.

Bamboo as an alternative

If you’re on a budget, you can use bamboo for your bow. Although the material will lose some quality with frequent use, it’s comfortable and replaceable for a self bow. Bamboo has to be heat-tempered to maximize the quality (Wet bamboos are not as durable as their dried counterparts).

Bamboo is already in use for traditional bows due to its tough and flexible properties.

What are the advantages of a longbow?

Longbows of today aren’t as tall as their medieval counterparts, but the same D-shape is still present. Manufacturers use innovative techniques, like laminations, to create longbows out of composite materials.

Longbows have practical advantages compared to compound and recurve bows: they are lighter to carry, faster to prepare, and more forgiving quieter to shoot. Their simple design on the grip and limbs makes them easier to handle too.

Compared to a recurve, the riser and limbs of a longbow are thicker. That means there are fewer chances of sideways movement (torquing) during the release. If the arrow moves to the side more often, it will affect the accuracy of the shot.

Pulling the bowstring of the longbow produces less friction between your fingers and the string, which is an advantage if you’re still starting.

A smoother release means lesser effort to pull back the string. So a longbow may suit your need for an easy shot.

A longbow with a proper setup has less contact with the string and limbs due to its size. The kinetic energy transfers from them onto the arrow without hassle.

If you’re looking for a quieter bow during target practice or hunting, use a longbow as your go-to bow. Although it may still produce a bowstring sound, it has a lesser sound without string silencers.

While recurve bows are prone to twisting, longbows are almost impossible to twist because of their well-built bodies. Although it’s not an issue for experienced archers, it’s not convenient for beginners.

A beginning archer doesn’t have to worry about the twisting issue (more common in recurve bows) as they can focus on proper form and accuracy. Therefore, longbows are more generous to amateurs.

If you’re a tall archer, there’s a chance that you will feel awkward when handling smaller bows. Good thing longbows are there as they measure around 64-72 inches. A Japanese yumi ranges from 72-96 inches too.

You can get a longbow as tall as you, depending on your preferred draw length and weight.

Longbows were weapons of war hundreds of years ago, and using them gives you more connection to the past.

Use one to give you a more traditional feel because it will also help you better understand how connected your longbow is to the past and present times.

If you got inspiration from pop culture and literature, a longbow comes in handy. Along with your traditional bow, use your leather quivers and armguards to complement it.

Archers use a longbow because of its simplicity and effectiveness. Therefore, you can practice archery at the most basic level, and the noise won’t bother you. If you have problems with inconsistency, you can practice with a longbow. There’s no quick fix, but a longbow will help you focus on your form.

The simple bow helps your steadiness, so you can allow the arrow to clear the bow and fire a good shot. It also helps you in getting a better form without rushing your release.

What are the disadvantages of a longbow?

A longbow lacks the modern design to shoot high-speed arrows compared to a recurve or compound bow. Even when it is easier and more forgiving to shoot, its stiff quality makes it less flexible to create a speedier shot.

Despite their uniqueness, longbows may be inconvenient to you due to their length. To be clear, you can use your longbow for hunting. But they’re heavy to carry around or put inside your car during travels.

Avoid going into trees and small and tight spots since the longbow is so long. Sadly, longbows don’t have takedown varieties, unlike recurve bows.

A usual bow release will transfer the energy from the bow to the arrow, which fires forward. But for a longbow, some of it gets back to the bow, which vibrates to your body. Think of it as a recoil from a fired gun. A hard shock may happen in a surprise too.

If you’re looking for a fast bow, the longbow doesn’t fit the category due to its heaviness. Its less stiff composition limits the ability of the bow to shoot at higher speeds.

The energy spreads out on the length of the bow, which produces lesser force and a slower shot. The bow is not ideal for bowhunting, given the short window to shoot your shot at hunting.

A longbow has a fixed draw-weight. So you can’t adjust it to fit another draw weight. While a longbow is essential for beginners, this is an advantage if they want to increase the poundage.

If recurves and crossbows have defective parts, you can replace these right away. But a longbow with a broken limb may force you to buy a new one because of its composition of a single piece of wood.

Although simplicity is an advantage, it can be a bane for an archer too. Unlike crossbows, which have sophisticated parts, longbows have the bow, bowstring, and arrow rest.

You can’t upgrade your longbow with the latest gadgets or mechanical parts in the market.

But considering simplicity as a pro or con depends on how you see it. If you love the traditional feel, go for a longbow. Otherwise, you may need to check out another type of bow.

How do you care for your longbows?

Your longbow is a handicraft made by bowyers (including you), and a quality variety is laminated to make it waterproof. Some bows have oil rubbed on their surface to avoid moisture, which destroys the bow.

Always have a routine check to inspect your longbow for possible scratches, dents, and frayed bowstrings, which will lead to performance issues or breakage if left untreated. Also, keep it in cool temperatures to avoid stretching it.

Take care of your longbow the way you look after yourself in archery safety. Use this handy guide as a checklist for safety:

Here are some bowstrings of your traditional bow.

Experts recommend never letting anyone draw your bow. Your bow adjusts based on your preferred strength, and any slight variation will knock off the performance.

When warming up, don’t draw your longbow too fast. Take your time to get you and your bow in the groove.

You can store your longbow inside a hard case and put it in a dry place, like a garage or bedroom. Or you can hang your bow or keep it flat on the ground – make sure that nothing will bump or destroy your bow. It’s not too late to invest in a bow case.

Although wooden longbows have the same quality as fiberglass, they need to have more gentle care because they are more prone to wear. They get more dents and breaks due to overuse.

To preserve the bowstring, unstring it when you’re not using your bow.

When you use your bow regularly, you can lose a little weight. However, don’t worry about increasing the bracing height as this will distress the wood, which shorts the lifespan of the bow.

If you see any dents or nicks on the bow, you can treat your bow with Danish oil. If you’re not sure, seek advice from a bowyer or any bow expert.

Click here to check for Danish oils in the market.

Related posts:
Are Recurve Bow limbs interchangeable?
Are Wood Arrows Good? Here’s The Truth
Can I Shoot a Bow in My Backyard in Illinois?
Can you reuse arrow inserts?
Previous Post: « Do You Wax Recurve Bow Strings?
Next Post: How wide is a hang glider? » 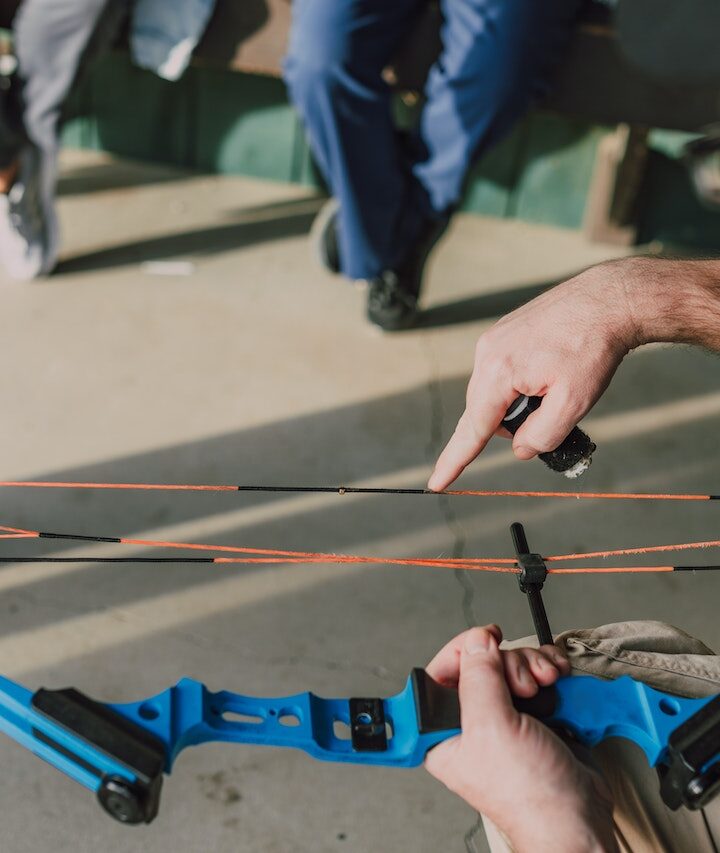