Home » Can you kill a bear with a crossbow? One of the most popular big game hunts nowadays is bear hunting. The suspense of being able to pursue a vicious animal makes it a wild and challenging experience. Its level of difficulty makes it more appealing to hunters who want to feel that adrenaline rush.

Bears can be tough to hunt due to their size, not to mention their ferocity. They can be quite dangerous, especially when they’re threatened or already wounded. Attacks are likely to occur, which could inflict serious injuries and death.

You can kill a bear using a crossbow but make sure you have in-depth knowledge of proper shot placement. Knowing the critical target zones increases the success of killing them. A precision shot is also essential so you can take down a bear fast.

As a hunter, understanding the basic bear anatomy is essential. It will help you know which vital zones to target. Remember, it is still your responsibility to use humane hunting practices. Learning the vital organs will give higher chances for a quick and fatal kill.

The anatomy of a bear is different from a deer and other big game animals. Its body structure allows for unusual angles, which can affect the vitals’ position. Here are the vital zones you have to identify in a bear:

If you plan on shooting a bear, head or neck shots are not recommended. Headshots are more likely to cause errors because of their thick skulls. The bolts could glance off, which increases the danger of provoking the bear. Also, bolts could pierce through the bear, but it may only result in missing jaws or noses.

If you want a quick kill, a neck shot using a crossbow is also not a good option. It may hit the esophagus or trachea, but it will cause a slow death. Also, a neck shot can leave no blood trails, which will make it harder for you to retrieve the body.

Shooting in the shoulder area is also not advisable due to the bear’s muscular shoulders and heavy bones. Even with the use of a high poundage crossbow, bolts won’t pierce through the vital organs. Any other shot only increases the chance to wound the bear and make it suffer.

There are ways you can practice to ensure a quick and lethal blow to a bear. Here are the two methods you can do:

The heart-lung vital zone is the best shot placement, also known as the broadside shot. A bolt will penetrate the ribs and straight into the heart and lung. Doing the heart-lung shot can also puncture both lungs, which makes it more fatal.

Broadside shot also causes bleeding, which leaves a blood trail that’s easy to track. To ensure the aiming spot, you can follow the back of the leg up and aim between ⅓ and ⅔ of the chest cavity.

The quartering-away shot angle is when the bear is facing away from you. The best aiming spot for a direct shot of the vital organs is the area behind the shoulder. A good reference point when you’re crossbow hunting is the opposite front leg. This shot angle offers a great opportunity for a clean kill of a bear.

Any incorrect shot placement could provoke a bear. Thus, the mentioned angles above can help you predict where the vitals are. These angles are more likely to give you a higher hunting success rate. Learning the bear anatomy is necessary for the quickest, most humane means of killing a bear.

Another key factor for a skilled hunter to a clean kill is patience. It is best to limit shots to the vital organs only. If you do not have a precise shot to the vital organs, wait until the animal presents the best possible shot.

How big of a crossbow do you need to kill a bear?

If you plan on bear hunting, you need a crossbow with a base draw weight of 68 kg (150 lbs). It should have a 450-grain broadhead and at least 350 fps to pierce through the bear’s thick skin.

If you plan to hunt a black bear, your crossbow needs to have at least 40 ft. lbs (kinetic energy). For grizzlies, it should range from 65 to 70 ft. lbs. When your crossbow has higher kinetic energy, your chances of a clean kill will increase.

It’s also best to shoot bears within the range of at least 20-30 yards to guarantee accurate shots. Even with the higher poundage crossbows, it is still a short-range weapon. So, make sure your crossbow is big and strong enough to land a fatal blow.

What time of year is bear hunting?

Spring and fall bear hunting seasons are the best times of the year to hunt bears.Spring bear hunting usually opens through mid-to-late June. Some states like Idaho and Montana opens it in April. Fall bear hunting opens from October to November.

During spring, more bears are coming out of their dens to feed and mate. As for fall, bears become more active in preparation for their lengthy hibernation. These months make a great opportunity for a harvest when you’re crossbow hunting.

Also, you’ll likely see a bear at any given time throughout the day during the fall season. It’s best to take down a bear with a crossbow during the morning and early evening hours. Hunting during these times offers more chances to spot bears due to their food search. They usually sleep an hour or two after sunset and wake up half an hour before sunrise.

Though in places where there’s a high human activity, they’ve become nocturnal to avoid people.

Is a bear considered a big game?

A bear is considered a big game animal. It’s also one of the most popular trophy hunts by hunters. Other examples of big game animals include moose, elks, deer, and boars, among others.

Big-game hunting is now an efficient tool to conserve wildlife. Aside from its recreational purposes, hunters connect to organizations to practice wildlife management. Through this, most hunters gain an appreciation of the animals and nature itself.

If you plan to join the big game hunting, you need a hunting license and permits for your crossbow. You also have to follow your state’s fish and wildlife department regulations.

Crossbows must have a minimum draw weight of 125 pounds for big game hunting. It should also have a draw length of about 14-inches. In some states, the requirements for a crossbow may vary, depending on the state’s regulations.

There are now 27 states that allow the use of crossbows during archery deer and firearm season. The states are:

Moreover, seven states allow the use of crossbows in firearms season only. The following states are:

Aside from a hunting license and permits, you need to consider the crucial elements. As a hunter, you need to have skill, knowledge, preparation, experience, and patience. It’s also necessary to know the variables you need to look out for when you’re hunting. The following factors are:

Bears live in forests or wooded areas where they can eat fruits, fruits, and vegetation. Many bears usually feed at the same place but at different times. Wherever there is plenty of foliage, forbs, or buds, you’ll find a bear there.

Bears have a keen sense of smell due to their nasal sinuses that can detect scents. Aside from finding food and interacting, they also use their nose to detect threats. During the hunt, make sure to consider the wind direction because bears can detect your scent with it.

Scent control while crossbow hunting is necessary for stealth. It’s important to position yourself downwind. Be aware of the bear’s location and take note of a suitable place for you to stay. You can reduce the chance of a bear detecting your presence by using masking scent or cover spray.

Using a tree stand is a popular big game hunting equipment. It should be at least twelve feet off the ground to prevent bears from reaching you. Also, keep in mind the reach or swatting distance of a bear. Regulations on using a tree stand may also vary, depending on your location.

What states are best for bear hunting?

Hunting with a crossbow has provided more recreational opportunities for many hunters. Perfect locations to hunt in are capable of supporting a large bear population. States that are great to hunt in with the use of crossbow are:

Alaska is a home of about 100,000 black bears, which is the holy grail of black bear hunting. Bears are abundant throughout Alaska’s forests. Aside from black bears, Alaska also has a range of bears, such as brown bears and polar bears.

You can shoot up to three bears per year in allowed designated areas. You can also hunt with the use of dogs and over bait during spring and fall.

Arizona harbors about 1,500-3,000 black bears in wooded areas and coniferous forests. It is also the home to some of North America’s largest skulled black bears. Arizona offers a unique and high-country hunt with optimal feeding conditions for bears. This state also provides a variety of food types for bears all year long.

Also, this state allows for a permit only spring season in select units. Though baiting isn’t allowed, hunting bears with dogs is legal in some regions. A crossbow is legal in Arizona for big and small games during general hunting seasons. The draw weight of a crossbow should be at least 125 lbs or more.

Montana is one of the best spot-and-stalk bear hunting places in the lower 48. It offers plenty of hunting opportunities and has a good bear population. It also offers $350 for spring and fall seasons with nonresident over-the-counter tags.

But, you can only use a crossbow during the firearms season. It’s also illegal to do baiting, hound hunting, and electronic predator calls. Killing a grizzly bear is also prohibited.

A mandatory inspection of your bruin done within ten days is also necessary. Remember to complete your mandatory reporting rule within 48 hours of the kill.

If you’re looking to hunt big bears, Pennsylvania offers chances for this opportunity. This state has produced five of the top 20 Boone & Crockett bears in the U.S.

You can use crossbow hunting during archery bear and archery deer season. You must have a license, archery stamp, and a hunting permit. If you’re hunting in the archery bear season, you’re not required to buy an archery stamp to hunt.

Crossbows must have a draw weight of about 125 pounds. Bolts should have broadheads of at least two cutting edges. It also must not be less than 7/8 of an inch.

Bear hunting has become a popular activity for hunters nowadays. Aside from recreation, it also offers great adventures for trophy book entry. Nothing beats that thrill of being able to hunt a ferocious animal.

But remember that it’s still your responsibility to practice humane hunting ways. A quick and fatal shot is essential to prevent the suffering of a bear or any animal you’re hunting. Use the following information above to guide you in a safe and legal bear hunting experience. 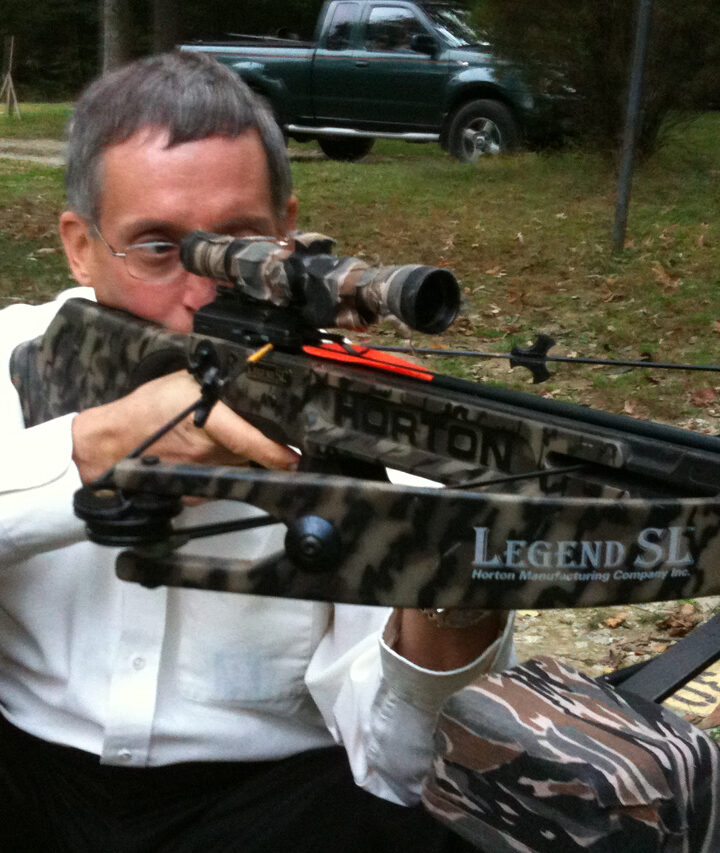